You are here: Home › Article › Saltwater Fishing › Costa Rica Tarpon On the Brain 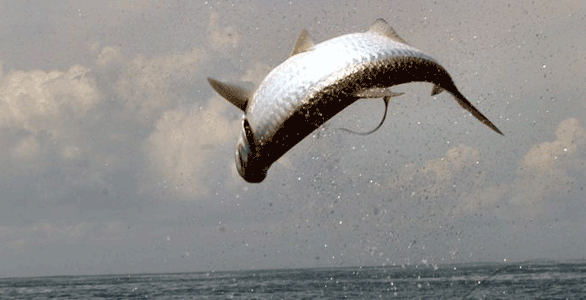 The early morning was made even more beautiful as the sun tried to burn away the mist hanging over the river. The Howler monkeys were doing their best to make sure I knew I was in the jungle with their larger than life calls. I was in Costa Rica trying to catch a tarpon.

Today we were on a small lagoon off the Rio California near the village of Parismina. To get our feet wet we were starting off with some small tarpon that our guide Carlos found here on a regular basis. As he shut the motor down and drifted towards the lagoon, Carlos switched to a paddle to move more quietly through the mist. “One o’clock, 100 feet” was the whispered command from the back of the boat. Sure enough their was a huge ring spreading in the mirror like water.

I stripped off a hundred feet of line ( as if I could really cast it all) and threw it about 70 feet, well short of the intended target. I stripped it in and tried another cast in the presumed direction, but nothing. “There he is again” as Carlos pointed further left and I just caught a glimpse of a fin as it slipped underneath the water again. If that was the same fish he was moving to our left and I think he was in reach of my casting skills. The adrenaline was flowing but I somehow didn’t step on my line or fall out of the boat or anything, I just cast. I stripped in the relatively slow style that I had been instructed, but nothing. “Same cast, again” came the voice from the back as if out of some spiritual movie. Well, I obeyed and the cast laid out fairly smooth. I stripped, stripped watching my white streamer, barely visible 2 feet below the surface. A large very slow flash appeared where my fly was and my line was tight. “HIT HIM!!!” God yelled behind me and I struck with a vengeance.

The next moment is a moment I will be able to recall the rest of my life. The line screamed away from the boat and 5 feet of tarpon exploded through the mist into the sun and hung 5 feet out of the water thrashing it head with his gills wide open. This must have taken a split second but it seemed like minutes before the fish landed.

The line was slack and I knew I had lost the fish. Somehow it just didn’t matter. It was the most magnificent sight I had ever witnessed while fly fishing. I sat down and noticed the adrenaline induced shake to my hands. I looked at Carlos and said ” I thought we were going for small fish!” I thought he was joking when he said “Yeah, tomorrow we’ll look for some big ones in the ocean” The next day I found out he wasn’t kidding.